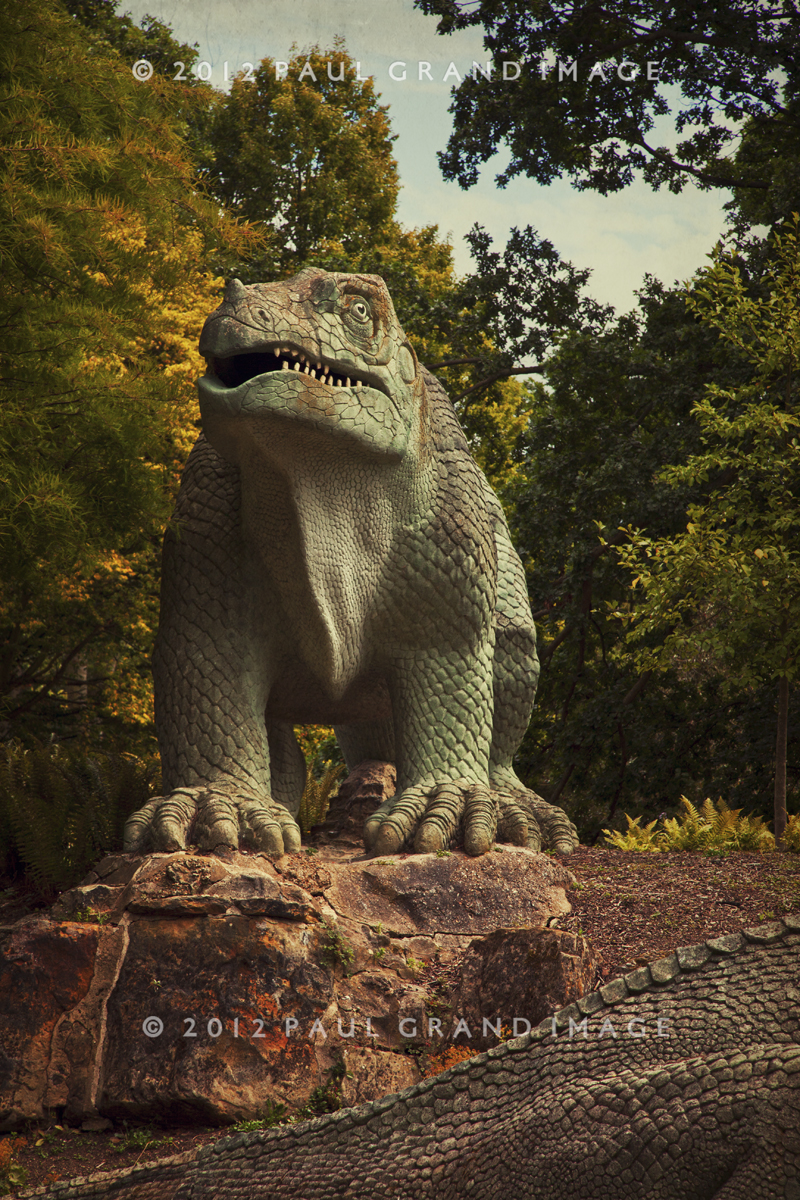 From central London its just a short overground train journey to get to Crystal palace, or what is left of it, after a huge fire burnt it to the ground in November 1936.
Built for the Great Exhibition in Hyde Park, and later moved several miles south of the London river Themes, to Crystal Palace park, where it flourished for many years, until it fell out of fashion at around the turn of the century.
During its building in 1851, these life size Dinosaurs were commissioned, and finally erected in 1855 at The Dinosaur Court , thrilling Victorians and Edwardian’s for over 50 years!
These historically important structures even pre-dated the publication of Charles Darwin’s On the Origin of Species by six years, though many physical, paleontological mistakes were included, they are still the first life-size dinosaur sculptures in the world!

I visited last August, whilst visiting the UK and was my first visit, I was lucky with the sun, snapping away rapidly to make the most of the fleeting sunlight, highlighting their scaly shadows (a mistake, as they didn’t have scales!).
Thankfully, they were newly restored after a hundred years of neglect and are now protected in perpetuity as grade one listed structures.
Later back in France, I forgot all about them until now, after watching Dr Russell Brown’s fabulous Video tutorial using our new web sized ‘Flypaper Taster pack‘ textures on an Ipad with their fabulous new Photoshop Touch App!
I was blown away by the apparent ease of use, and now have a similar recipe here to show.
Russell’s blurring of the background in his Chinese image was an inspired touch, and if you look closely at mine above you’ll notice how the finished Dinosaur seems to slightly ‘pop out’ of the image!

Processing was easy, the image was perfectly exposed, no burnt sky, but the sky was a bit too bright, so after an enhancement with Photoshop CS5 HD filter use, slightly flattening the detail and toning down the colour.
I popped it into Nik Color Efex Pro and used the ‘graduated medium density’ filter over the sky, and also a little bit of the Nik ‘Midnight’ filter to add more contrast and colour interest.

I then used Russell’s blur tool technique, though not as strongly as his, just around the background of the Dinosaur.
Next, using Russell’s amazing new Photoshop CS5 Flypaper texture tray filled with their hard-wired flypaper taster textures, simply clicked each of the three textures and let the gizmo take the strain, pulling all our textures into shape and setting its own pro-selected opacity, saving at least several minutes processing time!
Please check it out here, and keep revisiting Russell Brown for further updates that are in the pipeline for this ground breaking plug-in script gizmo!
(please note, this script will only work with Adobe Photoshop CS5)