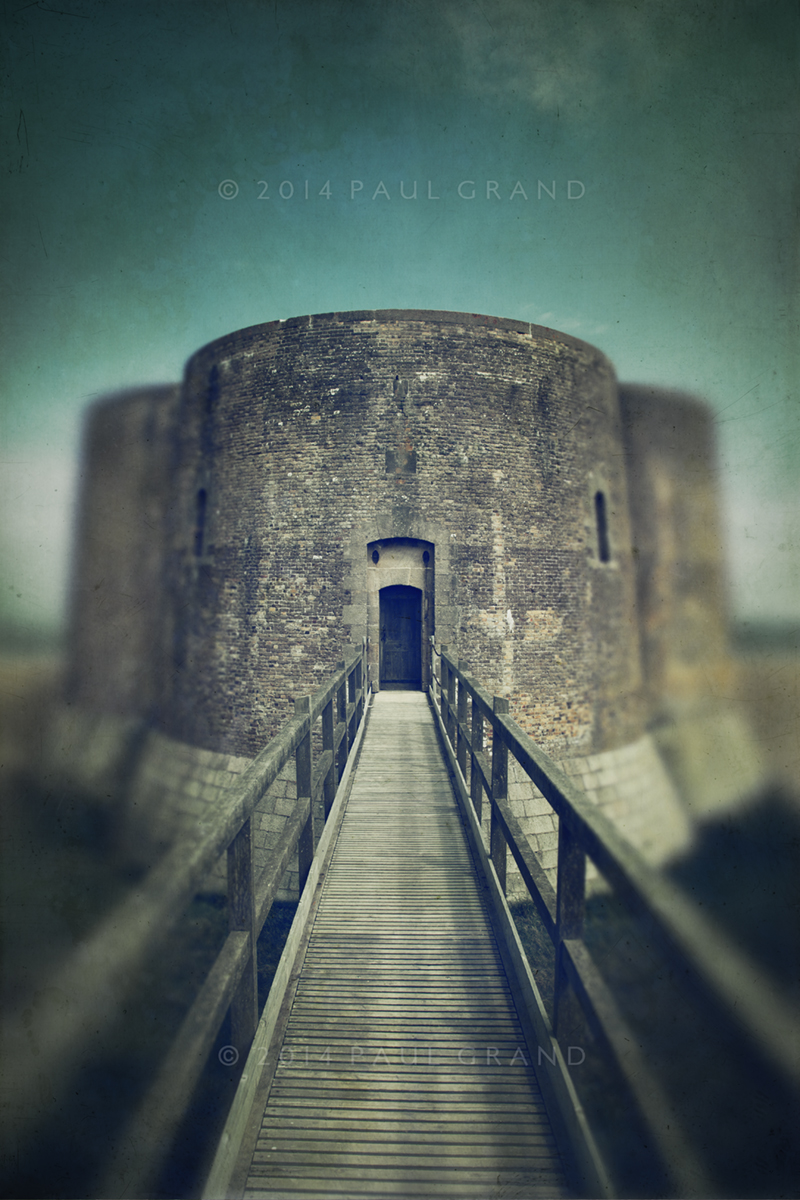 This Martello tower is the most northerly of the original remaining 103 towers erected and is situated in Aldeburgh on England’s east coasts Suffolk county, built around 200 years ago to defend England from Napoleon, for which happily they were never needed. But later used in WW2 for various gun postings. These days  several have been restored into trendy holiday rentals and many more are now full time homes. This one belongs to a trust and rents out by the night. You can see its cool interiors on this site:http://www.unusualhotelsoftheworld.com/MartelloTower

Now when I see the raw base picture and then the top moused-over processed version, I just cant believe how flat it was before, this has to be the sign of a successful transition, I also think cloning out the distracting flagpole was the right call!

On the day I captured this image we were blessed with a dull overcast sky, sun and shadows would have killed it as I was looking for a spooky soft atmosphere as this location  staged  the final  climax  of a very famous short ghost story by M.R. James – A warning to the curious, about an obsessive man who finally finds and steals a long lost anglo saxon royal crown from a burial mound close by. The monstrous ghost protector and avenger of the tomb hunts him down and finally exacts a terrible revenge on this very same shingle beach!

In M R James’s mid Victorian school days these decaying structures must have had an huge effect on his imagination, and I wanted to somehow get back to the look that captivated him, not easy when they’re so beautifully restored..

For processing I had in mind a look before id started and created a new preset, now in the preset 2 pack called Martello Tower, I was aiming at an old, antique calotype effect, so I first treated the colour and then blurred the sides to add depth, only after pulling the image out of Nik color pro efex I decided to blur the sides even more in Photoshop CC in the new Tilt Shift filter, with the horizon turned vertical. Finally I started the flypaper texturing to achieve a realistic grungy plate finish that fly’s just perfect for!

A  final color tweak to finish to knock back the green color slightly and add a cool watery blue tone.

Martello Tower Preset is from the Preset 2 pack, Muscatel and Colosseum Sienna are from Tex Box 2 ,  Tintype 14 is from the Tintype Pack, and Fly Edge 22 is from the Fly Edges pack.
Please visit our Pack page or Combo Pack page to buy Flypaper Textures.