The Girl Who Read To Birds ~ Michael Titus

For our first book interview we have Michael Titus, an American based on the east coast. The Girl Who Read To Birds is the first Children’s book by Michael, alias frogmuseum2 on Flickr
We’re old admin friends from several flickr groups along with Julie Miller who is the illustrator and the book’s designer.
Unfortunately she cant join us here as she’s on a well earned vacation, but perhaps we’ll catch up with her later!
After receiving and having read The Girl Who Read To Birds over the weekend I was delighted to see it had the grungy, modern textural feel that we love here at Flypaper central!
It reads as a classic children’s fable, and would delight both the young and young at heart, with a message for all. 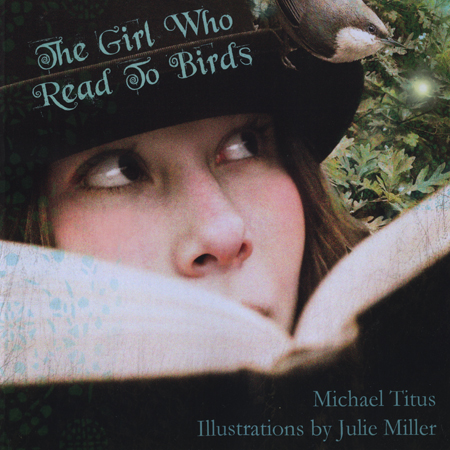 Hi Michael, can you place yourself on the world map for us?

I was brought up in Morgantown, WV. Now live in Spencer, WV a tiny rural town, surrounded by hills — rather isolated, but beautiful.
~ I’m a bit of a hermit!

When you started this project, did you have an illustrator work with you from the outset, or at what stage did you bring Julie to the project?
Also, did you issue pre-instructions such as full colour, ect?

I was fortunate in already knowing Julie Miller, the illustrator/designer of the book. I sent her the manuscript, she loved it and was enthusiastic about doing the illustrations. We communicated by phone and email to discuss which scene should have its own image. There was some give or take, but it was a joyous collaborative process. Because I already knew Julie, I trusted her judgement. She’d send me each new image and we’d discuss it. It’s our book, because of the close collaboration. Julie’s input was phenomenal. With any other artist, I’d have to give more direction. With Julie, the book emerged from its cocoon in a very natural manner!

They say you should only write about “what you know”, so where did you get your characters from, are they based on people you know or have met?

I don’t necessarily believe in writing “what you know”. What I can say about this book is that it is based on people I know and those I don’t. For example: the character of Avery is partly me. There is probably a bit of me in every character I write. In this book, it is mostly Avery Street I identify with. But I did not live her life. She did. I was encouraged by my parents to read. I was read to as a child and though we had little else, we had a library. The characters basically come to me. I’m a sort of raconteur. I let them tell their stories to me. I don’t mean that to sound mystical. It’s not. It’s a dialogue between myself, as a writer, and the characters, as living beings. Back to your original question: I do write about what I know, or think I know. But that’s not to say I follow a certain logical pattern. If I only wrote about what I know, it would be of little interest to me. I mainly write because I want to read a story. If that story has not been written (or I have not discovered it), then I must write it. I suppose I’m first a reader!

Thanks, I could sort of see that Avery was you, with the bowler!
When I write, I agonize about the “voice” of the story, was it easy for you to find “your voice” here and did you ever consider writing the story in ‘the first or second person’?
Also, when you started writing, had you an ending in mind or did you just allow the story to develop?

I’ve never had trouble finding a “voice”. I’m only conscious of writing what the characters might say according to their age. In a strange sense, the characters “lend” their voices to me. I don’t understand how that works. I personally do not like to write in the first person, so I never considered that. I think it’s harder to do; you have to really become the character and constantly think “I.” I prefer to let the characters unfold, so that even though I’m writing their stories, I’m also discovering more about them as I go. I like the idea of going hand-in-hand with them — and I’m not always the leader.
For The Girl Who Read To Birds I actually worked backwards. I had the ending in mind, and written, before I began. This was new to me, as I generally outline a story before I start. In the novel I’m currently working on, I don’t know the ending. I’m letting the characters take the lead in this dance. There’s much more dialogue in this novel. And each character has a unique voice and manner. Again, I don’t find this difficult, although dialogue isn’t easy. You, as the writer, have to believe absolutely that these characters are real. I’ve put down many a book because, after “hearing” the dialogue, it just didn’t sound authentic to me. I visualize the characters and the scene. This runs in my mind like a film. When writing the dialogue in Chapter One, I could barely keep up with what the characters were saying. It was like taking dictation. I remember thinking “Hey, slow down! Could you repeat that last sentence?”

I totally agree about writing in the first person being harder, my first and last was agony, I’m now writing a follow-up in the third removed and it seems to write itself! Its also good to detach yourself when the baad things happen! – I digress. Knowing you have a famous affinity with cats, do you also have the same love for birds?

Yes, I adore birds! Always have, even as a child. There is something magical about them to me — especially the Corvids: Ravens and Crows. Fascinating!

Getting back to you, and um, delicately killing off a character … as you’ve already said you have to believe in them, so don’t you then find it’s hard, even if its a necessary plot development?

Yes, I do find that difficult. It often makes me melancholy for a bit. In “The Girl Who Read To Birds” all the characters are gone at the end. That was heartbreaking, but it’s also the way of all life. Each human life is a book, with a beginning, middle and end. Lots of bad things happen in the new novel. It’s darker in setting and tone. But it also has humorous moments. And scary moments. Bad things are going to happen, although I’m unsure about what they are or when they’ll occur. But, as you say, sometimes saying fare thee well to a beloved character is a part of the plot development. You can’t be afraid of going through with it.

When you were growing up, which children’s books stuck in your mind, I suppose, what I’m getting at is, who are your greatest influences?

Finally, If any of our Flypaper readers have manuscripts under their beds, what advice could you give them for getting published?

First, make sure the manuscript is complete. Read it again. Make any changes you want. Revision is the key to good writing. Then send copies of the manuscript to friends who are willing to read it and give you honest and unbiased feedback. Take notes of the feedback. Ask yourself (and this can be hard) if you want to make changes according to what others have said. Then find someone who actually edits for a living. Chances are you know at least one. Writers are often poor editors. Have the editor go over the ms. with a red pencil. Ask them not to be merciful. You will find you’ve got some punctuation or syntax wrong. Again, decide, from your gut — and keeping your intended audience in mind — what changes you will make. Revise again. Submit to a literary agent. It’s not so easy to get one, but do your research and try. Follow their submission guidelines to the letter. They get so many manuscripts that they will look for a reason to toss yours away. There are also many very small presses that might choose to accept your ms. Independent presses are growing. They are often a very good choice to see your book in print.

If you decide to self-publish, be very cautious. You might end up spending your life savings only to find a crudely finished book in your hands. Do a lot of research. Ask around. Most of these companies will take much and give little in return.

And remember: no matter which way you go, you’re going to be signing a contract — some sort of Terms Of Service or agreement. It might not be written. Take the time to read every sentence, so you do not give away rights that may cause you a lot of grief and regret.

I know that’s rather long, Paul, but it seemed necessary to help others avoid some common mistakes that might return that ms. under the bed!

Thanks for that comprehensive check list, Michael, I’m sure this will help many people! Good luck with the second novel and we hope you’ll return to share it here!
Many thanks also for kindly allowing us to reprint a few images from the book.

Thank you very much for the interview, Paul!

Hit the blue link to go directly to the books website and sales!
The Girl Who Read To Birds