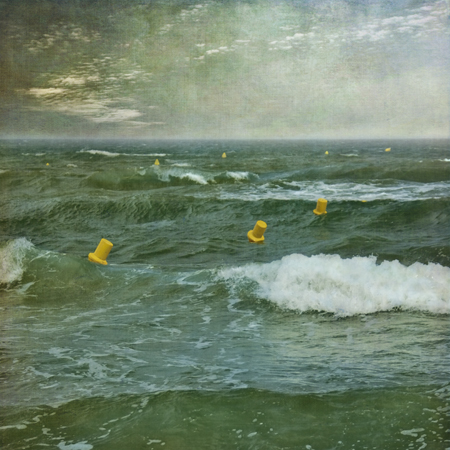 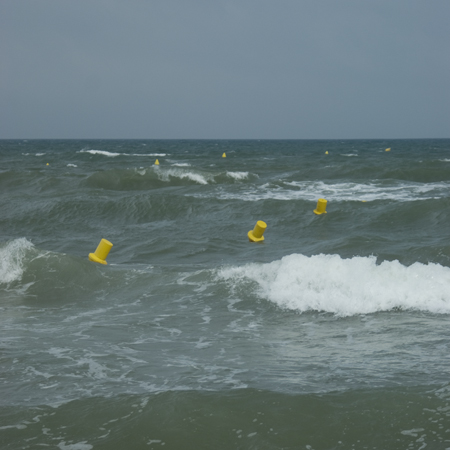 We already spoke about three objects being better than two in an image,
so I’m pleased to be able to put this maxim to use once again.
Here two buoys wouldn’t work quite as well as the three buoys!
Overall we counted nine buoys.

This stormy sea picture was great fun to do,
I had a whale of a time going through the Flypaper texture packs.
Many textures would work on this kind of image, as the sea is very forgiving with overlays. However, sunless days tend to work better than bright sunny days when you get too much contrast and blown-out areas.

To start, I doubled the image and enhanced, with my usual slight painterly effect.
I then beefed this second image even more in curves.
This is a good thing to remember, when you intend to use several textures, it helps stop that overall muddy effect if your base image is very strong.

Just over the top sky, I pulled;
Lavender Skies – Soft Light @ 100%
leaving a pale line above the seas horizon and overlapping the sea itself in an effort to soften the line.
One top of this I placed;
Sunflower Sky – Normal @ 95%
Over the rest of the picture I opened a second;
Sunflower Sky – Soft Light @ 62%
The top was pulled to just below the waterline, I think I added this to help add richness and bring some of the new skies tones into the water.
On top of those layers I made a new copy of the base background enhanced layer:
Background copy – Normal – @ 67%
This pulled it all back together, the sky part was entirely removed to show the new textured sky.
To finally soften the remaining waterline, I opened;
Lime Plaster – Screen @ 42%
I softly removed all of this, and just left a little on the waterline, like a line of mist you would have on a really rough day.
Next I wanted to brighten and soften the whole image, I dragged;
Apple Blush (desaturated by 50%) – Soft light @ 32%

Here I first saved, then merged the whole lot before adding the finishing touches of a final texture.
Because although I liked it, I found it just a little too green, so I opened my old favorite;
Necropolis – Soft Light @92%
This was pulled down over the whole picture, and lightly removed with a small soft brush from several areas, like the white foam and the horizon, as I didn’t want to lose those fresh whites.
This final tweak gave the image a rich old painterly effect and helped pull that sky together. Sure its a little over textured, but sometimes you’ve just got to push the boat out!

You can see it bigger and clearer on flickr Here