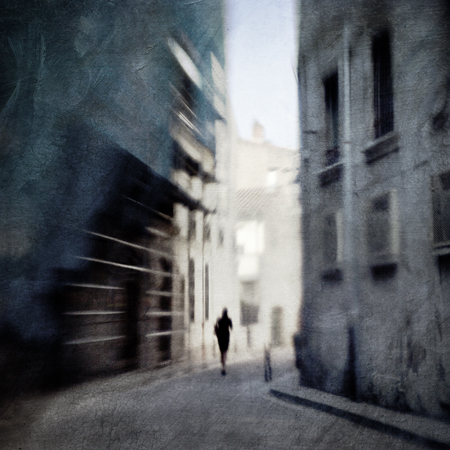 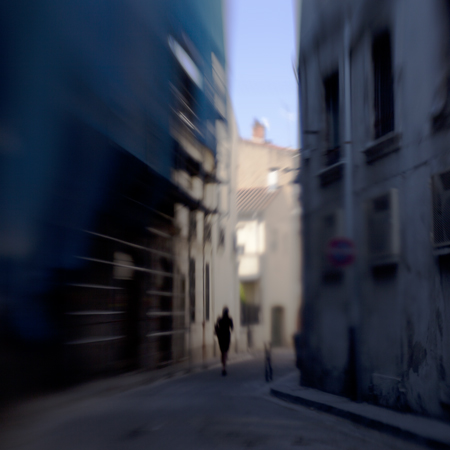 I’m no stalker, but when I see a great silhouette, and I’m armed with a camera, I will sometimes move just a few tiny paces to try to get a secret shot!

Our narrow medieval streets are perfect for this type of shot, though for the same reason our streets are often too shaded and thus too dark, and don’t even get me started on my pet hate, parked cars! Here I used the trusty Lensbaby once more, lens wide open, at F1; no aperture. It was around 5pm, before the sun wasn’t too low but also not directly overhead.

As we’ve been asked, Ive tried to recreate how I processed, step by step, and why I chose the textures used.

To the base image, to add more definition, I first slightly cross processed it and used a slight vignette darkening the edges. You can do this simply with free photoshop actions

To start with texturing I wanted to add more light. For my recent lensbaby shots I like to use the new Opal texture, here I used it twice, then I wanted to add a more beefy texture and darken the sky, I chose Tempest Sea, flipped vertically.
I loved the painterly/scratchy effect on the blue scaffolding covers brought by this texture, but found the overall blue a little too bright/fruity. So another favorite texture was pulled out, Newt to help tone down, which was okay but still not quite there, so I clicked it off. Finally I tried Swans Way for the first time, as I liked the look of that billowing canvas like movement this texture suggests, and Wow, happy days! It toned down the blue perfectly and pulled it all together and added a dramatic cracked grunge!

It was almost finished but decided there was now just a bit too much street clutter which the textures had highlighted.
So I clone tooled out a red road sign on the right, and a pale board on the left under the scaffolding, both clearly visible on the raw base image.